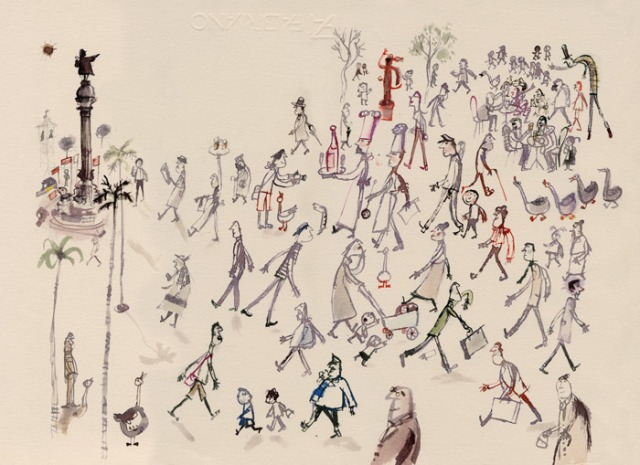 I have a cloudy memory of my first excursions abroad, an adolescent, chock-full of English working class inferiority, in full awe of the French and weighed down by all the standard clichés, stepping off a channel ferry into, the magnificent exoticism of….. Boulogne. Virtually the shortest step for any Briton venturing abroad, it seemed such a long way at the time and everything about the place lived up to the adjective foreign, even the road surfaces – I remember wondering what they did to make them seem somehow different. There I was, abroad, a place awash with a glorious otherness: a language I hardly recognised, despite studying French at school; strange smells; strange architecture; strange cars moving in a strange direction…. I remember vividly the relief I felt when I arrived home.

Since then my excursions to other countries have been mostly as a tourist and although I have travelled and worked abroad, regardless of the guise I’ve never quite managed to escape from the notion that there is something inherently contradictory about the experience of going abroad.

According to Turkish psychotherapist Seda Sengun (2001), writing about migration and what happens to the psyche of the person who migrates,

culture is the part of the psyche that only becomes evident when a person is in a different cultural setting.

So I go abroad and find out about … me. In the face of the absence of the familiar, in the presence of the strangeness or otherness I describe above, the principal concern of the average tourist or foreign traveller is to do everything he/she possibly can to resolve the anxieties this generates by rendering familiar the foreign. The most natural response when faced with the anxieties brought on by the new, the strange and unfamiliar is to set about constructing the circumstances in which we can once again feel safe, at home and able to locate and recognise oneself. Sengun tells us that cultural experiences become something to hold on to,

Familiar tastes, smells, tunes, and gestures provide containment and comfort, reducing the anxiety of separation. For example, the resort and the million package holidays it spawns are nothing but manifestations of the foreign made safe for domestic consumption, the familiar exported abroad to meet the unquenchable thirst of the holiday-maker for home comforts and more of the same, packaged to soothe the anxieties of being, albeit even temporarily, away from home. In this context the foreign is constructed as nothing more than a cosy stereotyped fantasy. That way we can remember where we are— “Oh look a Flamenco dancer. We must be in Spain.” While on holiday, nobody wants to have to deal with the complexities of the host culture; we want it simple, pre-cooked, digestible and capable of being washed down by a pint of lager, “although they don’t call it that over here, do they”.

Now I find myself many years down the line of living abroad and even so at nearly every turn I encounter situations in which I am reminded of my position as an outsider, a migrant with little real connection to the mainstream local culture. What I am becoming proficient at here is knowing where to go to allay the anxieties I have as a result of being an outsider and in-so-doing constructing a familiar enough home for myself and, of course, in a place like Barcelona, the familiar is very easy to find. There are times when it feels like I don’t actually live in a foreign country.

Through the internet I have near-as-damn-it instant digital access to virtually the whole English speaking world. Digital TV has solved the pestilent problem of dubbing. Anyway I can more or less get the TV channels I want. My living room could be my own private tranche of the Empire of the English language. Who needs to speak Spanish in Spain? Let alone Catalan!

The high street in most Spanish cities has a pungent whiff of familiarity about it, with McDonalds, KFC, Pizza Hut and a myriad of other eateries with global leanings. We are all activists in the people’s republic of Ikea and believers clogging the aisles of multiple cathedrals of consumerism

So, is it a problem, the gradual erosion of the place called abroad in our lives? Well, there are risks both ways. At the other extreme to the process I describe, it is possible to over-adapt and attempt to negate completely where you are from and fully assimilate into the host culture, without even so much as causing a ripple. This relates to a time when it was much less easy to carry your culture with you and when you were much less likely to encounter elements of your cultural experience wherever you went. Nowadays, it takes little effort to construct an island made of home comforts, maintaining a protective distance from the exotic and strange host culture. The forces of conformity that drive us towards the comfortable and familiar, homogenising and neutering experience are just one element in the overall evolution of a global culture. In this sense, globalisation is nothing more than the spread of the more dominant forms of home comfort.