This short article is aimed at people who are currently thinking about going into therapy. Perhaps you have never been in therapy before or you are thinking of trying something different. I am writing this as a firm and enthusiastic advocate of group based therapies, particularly at a time of seemingly permanent shrinking state provision and economic crisis. But this is far from being just about cost, although it is clear that group is between half to a third of the cost of individual therapies. I invite you to briefly suspend your fear and scepticism about sharing the therapeutic space with others and to read on… 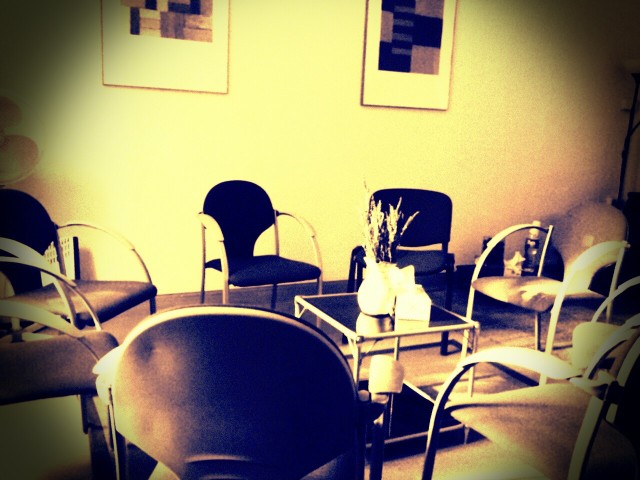 I want to state a case for group therapy, basing my position on my own long experience as both client and therapist, as well as teacher and supervisor. Here, I do not wish to elucidate the evidence base, because in a strange way this tends to generate confusion and mistrust, mostly because we can shape evidence to make it say what we need it to say. What I will say is that while for group therapy the evidence base is good, it is probably not as good as it could and should be. Other modalities (mainly cognitive behaviour therapy, CBT) have been far more successful in two clear ways: firstly, in adapting to the medical model and its demand for a scientifically researched evidence base; and secondly, in acquiring powerful political benefactors who defend and over-promote their efficacy.

In my experience, over 90% of people seeking therapy are wanting an individual, i.e., an exclusive, relationship with their therapist. The suggestion of group is either flatly rejected, deferred down the line, or, after serious thought, quietly declined. Why is this? Similarly, mental health services are rarely based on group based treatments, even when the economic, health and cultural benefits for society are compelling. Why?

The decision to go into therapy is never taken lightly. On the contrary, it is usually experienced as daunting – it is often put off as a consequence – and fraught with difficulty once decided upon. The fact that people are at their most vulnerable, by definition, at this rarefied juncture of their lives, is of course a core component of this difficulty. Above all, the search for a therapist involves entering a noisy and crowded marketplace of stallholders and street vendors, each with something to sell, each convinced of the quality of their produce, each needing custom.  Despite squeezing the fruit and weighing up the proof – an evidence base of scientific research is now a standard requirement for all therapeutic schools and orientations – the ‘facts’ still often feel contradictory and confusing.  As in any other market, there are fads and fashions, and, even when the rational, solid and well-organised pretensions of science promise greater certainty, the experience of entering therapy still feels like a leap in the dark, essentially, an act of faith.

Hardly surprising then that when it comes to choosing a therapist, people rarely arrive at an initial consultation with a clear preference for group. There’s just too much extra uncertainty in committing oneself to a group of unknown others. Besides “it’s precisely because I have problems in my relationships with others that I’m here”. “I need and want your undivided attention.” “I won’t be able to talk about my stuff with others I don’t know…I would be too uncomfortable and embarrassed.” For the group therapist there is clearly an issue of needing to convince clients of the strengths and clear advantages of group therapy. Interestingly, this need to make a sales pitch for group was not present when I worked in a UK National Health Service department of psychological medicine psychotherapy unit (Barts Hospital) in which the primary therapeutic treatment modality available was group, clients were much more disposed to accept the challenge of group.

So, why would I gladly recommend group to the majority of clients who approach me.

Group therapeutic factors: A good starting point is Irvin Yalom, one of the key figures in opening up and demystifying the sometimes obscure and cultish world of psychotherapy, largely through his writing, part fiction, part case-study, in which he has succeeded in being serious about psychotherapy by being accessible, entertaining and literary, and without sacrificing clinical respectability. In his early work, in the field of group therapy, Yalom undertook research attempting to investigate and describe just what is therapeutic about group therapy. He outlined 12 therapeutic factors and, while he was not the first to attempt to do this, his deconstruction of the inner workings of group therapy has continued to be one of the most influential in helping us make sense of the complexity of what happens in groups:

Each of the above 12 factors was broken down into 5 statements – making 60 in total. Each research participant was asked to rank each statement according to whether it applied to them. The following 4 statements were the top 4 in the research he cites in his book (Yalom, 1985):

If you are looking to change something in your life.

Change is at the heart of why people seek out therapy in the first place. You may have heard the joke: How many psychotherapists does it take to change a light-bulb? The answer is one, but the light-bulb must want to change. At the very least the therapist seeks to engage that part of the person that wants and needs change, mindful that change is also deeply feared because of what it implies.

It might be a specific life circumstance I want to change, or a pattern in my behaviour that keeps repeating itself, or a longstanding feeling that my life is not how I want it to be. While, there are many things that might serve as the focus for what a person might want to change, one issue frequently present in therapy, often the cause of breakdown in the therapeutic relationship, is how to transfer what I’m learning about myself IN HERE to my life OUT THERE. What truly sets group therapy apart is that it provides a living, active, unscripted, real context, a (hopefully) safe-enough situation within which I can put what I learn about myself into meaningful practice. Group analyst Dennis Brown called this aspect of the group experience ‘ego training in action’. The group provides a context from the very start in which I can put into practice changes in my way of relating and going about my life. I can also talk through and reflect upon any changes I am consciously attempting to bring about in my everyday life. In this sense group therapy is a kind of apprenticeship in learning to feel and be in relationships in which I acquire resources, skills and tools that are more than just ideas and that do not merely evaporate at the clinic door.

I don’t know who I am

Psychoanalyst, sociologist and group analyst Earl Hopper (2001), described therapy groups as providing opportunities to try on and take off

Added to which, the group provides a ‘benign mirror’ (Hopper, 2001) for me to see myself, mostly through the eyes of others. This on-going lively, free-associative communication and exchange with others is absolutely central to the group process and vital, if I am to learn who I am and, by extension, who you are. Through feedback from others I learn that I’m more complicated and varied than I thought I was, at the same time as learning that I’m not the ideal self I thought I was or hoped I’d become. I learn that my identity isn’t a fixed entity, but a complex internal interactive multitude in constant interaction with the world.

In this way I become more accepting of who I am, warts and all, and less neurotically driven towards self-perfection. I develop a greater awareness and compassion for my wounds and vulnerabilities. I become more acquainted with and accepting of my shortcomings and limitations. Likewise, more able to experience and enjoy my strengths and qualities. Plus, I develop an equivalent degree of compassion and admiration for the same mix in others.  What’s most surprising about this is the discovery that it is not just me who defines who I am. Suddenly, now that I am more accustomed and able to hear what others think and feel about me (how rare it is in everyday life that this happens!?) I begin to accept that others have quite a significant role to play in helping me know who I am. I learn to drop my disguises, because the group helps me feel less ashamed of who I am.

According to Robin Skynner (read HERE his 1994 article from the Guardian newspaper on group therapy) the “social contact” in the group provides an antidote to the “culture of narcissism” in which a “me generation” is unable to cope with frustration and “see beyond the next temporary fix”. I learn that my needs and who I am are intricately bound up with being with others and listening to what they have to say to me and communicating some of what I have to say to them.

Coming out of isolation or immersion and learning who we are. Surely it is enough that therapy is about who I am? I would say an emphatic no!!  Who we are is of equal if not greater significance. It is virtually impossible to describe who I am without relating to the family, community, social, cultural and political roots of my identity. Psychoanalysis has tended to isolate mothers, babies and families and to pay insufficient attention to the context of their lives.  Problems in the relationship with the group environment are at the root of so many of the difficulties bringing people to therapy. On the one hand, excessive isolation from the group and on the other hand, over-immersion or excessive involvement.  A therapy group provides a place where the polarities of isolation and immersion are in constant interplay within and between each group member.  For many the fundamental issues are concerned with coming out of isolation and increased engagement with the surrounding world, for others it is more about separation and self-discovery.  Curiously, the antidote to both extremes is the same culture within the therapy group of open communication, exchange, honesty and dialogue, a culture which draws the isolated person in and, at the same time, differentiates each person’s uniqueness, thus facilitating separation.

Learning to engage with my world. Groups always remind us that who I am is meaningfully linked to the world about me.  In group therapy I learn that my story is bound up with a much bigger story, a multidimensional story with breadth and depth. The insights I gain about my life form a solid ground for making sense of a wider world. Similarly, the concern I develop for my group nudges me towards a greater capacity for concern for how the world is. The opportunity brought into being by participating in group therapy, is the appropriation of a place in a world I am now more able to take seriously.

I hope that that above has at least provided you with some food for thought. On my website www.groupworks.info you can find out more about how group therapy is organised as well as links to relevant organisations. If you would like to discuss the possibility of joining a group please do not hesitate to contact me. I look forward to hearing from you.

One thought on “Why Group Therapy”